I've been having a lovely time with Shrink Plastic! Haven't played with this since I was a kid and the 4 of us used to fight over who got the little Shrinky from the cereal box....aaah those were the days, they should start putting them in Special K for grown ups - you could collect mobile charms - they are definitely missing a marketing opportunity there!
Anyway, here are the little charms I made last night ... 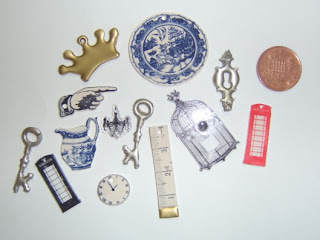 The detail doesn't show up too well here (photography is not my best thing!) but I've put a penny in to give you an idea of scale.