A few months ago, John brought home some manky-looking old potatoes which he had found in his Mum's larder - he thought maybe we could see if they would grow.
Well, they didn't look very promising - little knobby brown creatures with long shoots already feeling their way out of the plastic bag they were hiding in - but I didn't have the heart to throw them away.
So I left them languishing in the shed for a few more weeks and some time in April I finally put some in the veg patch - just dug some holes, threw them in and covered them with earth.
They've been watered along with everything else, but that's it, so we didn't have any great expectations, but they've grown into sturdy leafy plants despite our neglect.
A few days ago, we decided to dig one up, just to see if there was anything down there .... and LOOK what we found, just from one plant! 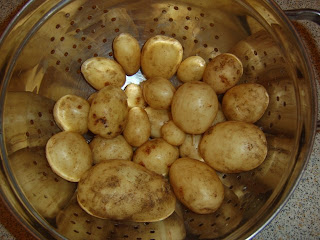 Amazing! and delicious .... we'll definitely do that again next year, maybe in a slightly more organised fashion (or maybe not!)
Posted by Annie Claxton at 21:07

Email ThisBlogThis!Share to TwitterShare to FacebookShare to Pinterest
Labels: Diary, Home and Garden