Two for the Price of One!

These two very different pages were both inspired by the same layout - it was the one by Mahlin Wiggur which was featured on the front cover of the first issue of Scrap365 - I loved it and will probably do several more versions of it in the future
This first one shows my Mum when she was about 14 - I love it because she looks so happy and full of hope with all her life ahead of her. x
You can see I've used one of those bargain PG Tips cards(see a previous post), some of the end of my Quirky Kit (new one due any minute!), lots of washi tape (which I am SO into now), and I've stamped musical score and flourishes which I've highlighted with Ruby Red Liquid Pearls. The photo (NOT the original) was coloured with Distress Inks using a Cut-n-Dry Nib 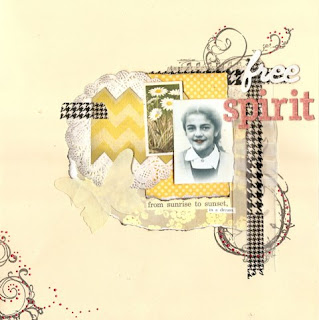 And this next one shows my elder son, Richard, at about 10 months old - he was such a lovable little chap, he had just found his feet and was into everything - but especially fascinated by the washing machine! x
I've stamped with bubble wrap, then used the bubble wrap on the page. Several colours of pearlescent glue were used to paint the background and create the dragonfly and the "boy" was embossed onto some thin metal and coloured with alcohol ink. The papers were just white scraps which I tore and coloured with inks. 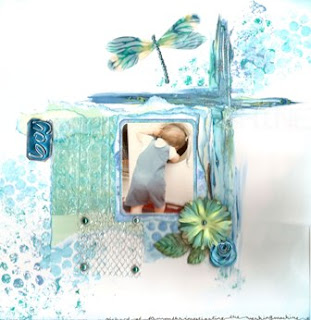 Email ThisBlogThis!Share to TwitterShare to FacebookShare to Pinterest
Labels: Ideas and Inspiration, Scrapping

It has been lovely catching up with what you've been up to. Lovely pages... and the picture of Richard is so cute. Great idea to use bubble wrap to imitate the bubbles!

Thanks Moira, I've been having a lovely time, just don't have enough hours in the day! How about you? What's going on with Belstead?