Hi all - I have THREE tags to show you tonight ... the first one was inspired by the wonderful Tim Holtz, who has been posting an amazing tutorial every month for the 12 Tags of 2012. Every one is truly inspirational and even though I may not have all the supplies he uses, I've learnt a new technique every time - check it out, you'll be well impressed I promise you ...
Anyway, here is my not-quite-so-impressive version! 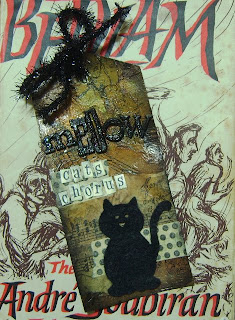 The next one is for the inspirational Tag Tuesday - the theme this week is Hallowe'en and I thought I'd try something a bit different - Beetle Jooce - yum yum! 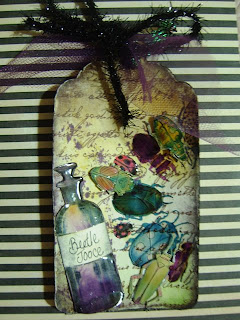 I used a fab rubber stamp to create the outline of the beetles, then had great fun colouring them in with Wispa markers. I like the way the script background shows through. Then I used Glossy Accents to pick them out. The bottle was an image from the Graphics Fairy , which was cut out and coloured with Distress Inks and then I used Glossy Accents again to give it a glassy effect. Here's a close up 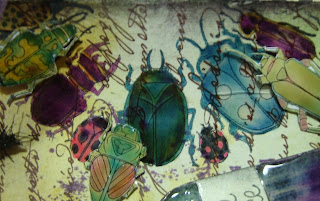 I don't think I'll get many excuses to use the beetles stamp, although I think it's such a beautiful image - they're all in a circle so you can only see half of them here.
This third one was a last minute idea - I happened to spot the skeleton image on the Graphics Fairy and couldn't resist! I antiqued it a bit with Distress Inks, applied it to a background created with tissue, Mod Podge and Distress Inks (Tim Holtz inspired - I LOVE TH!) 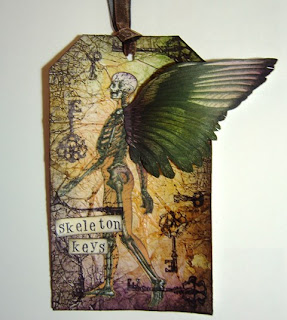 Then I added a wing (Graphics Fairy again - can you tell I LOVE GRAPHICS FAIRY TOO!?), also coloured with Distress Inks before adhering to the image - I think maybe the wings should be instead of arms, not as well as, but hey ....
Ok - best get them uploaded before I turn into a pumpkin!
:o)

Nice collection of tags. I like the crumpled tissue backgrounds and the images on the last one look great.