Star of the Show!

How cute is this?! A row of delicious mince pies in their school Christmas Play
Brings it all back ... in fact it's hard to believe it's about 20 years since I last made a costume for a school play ...

... aaah, those were the days ... teatowels on heads, fur fabric donkey tails stitched to leotards ... one year Richard was at the front of the stage wearing a leotard affair over the top of his pants; he got bored waiting for his next line and occupied himself by getting hold of his knicker elastic and streeeeeeetching it as far as it would go, whilst bending up and down at the knees like a small brown furry Dixon of Dock Green. It was MESMERISING and totally distracted the audience from the actual play. Richard was completely unaware, but we nearly wet ourselves trying not to laugh out loud and had to leave the hall before we disgraced ourselves.
Still makes me giggle now ... Memorable quotes ...


Here's a link back to my original post when I had just finished making Bailey's Mince Pie - up to my ears in felt and wadding ... which reminds me ... does anyone have any ideas for ways to use teddy bear coloured felt? I bought 3m to be on the safe side but only used 1m ... hmmm ... 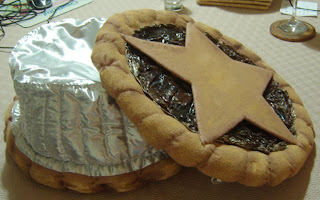 Email ThisBlogThis!Share to TwitterShare to FacebookShare to Pinterest
Labels: Diary