A is for Apple

Hey everyone! Tut tut, it's been nearly a fortnight since I last posted - I've been working on a project which just HAD to be finished by today, so everything else has been on hold but IT'S DONE NOW! Phew - can't tell you about it just yet but it's very exciting ... watch this space!
Anyway, back to the Apple (and I'm not talking about my iPod) - this year at Tag Tuesday Carolyn has challenged us to work through the alphabet, taking a new letter each week and letting it inspire us to create a tag. So I went with the first word that popped into my head for the letter "A" - APPLE! Here's my creation 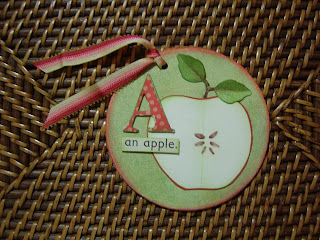 Tags are a great way to


They're only small, so not too daunting and you can just have fun with it :o) Go on - you know you want to!
This one only took about half an hour - here's what I did -

This was so much fun - have a go at one yourself, and if you haven't visited Tag Tuesday yet, what are you waiting for?! It's really inspiring to see so many interpretations of the theme and they're a really friendly lot too - I love being on the Tag Team :o)
Posted by Annie Claxton at 21:23

what a great idea! Adorable:)