:o) hehehe (seriously though FAB prize to be won - check it out) 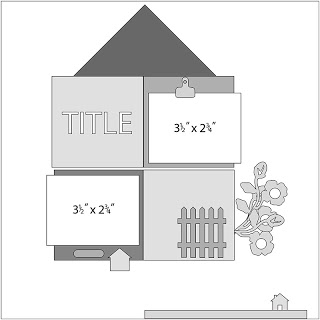 For this challenge, you can make any scrapbooking related project - it doesn't have to be a layout as such.

I thought it would be perfect for a page about my son's little "house" under the stairs - he used to spend hours playing in there, with his little rabbit "family". We would have to knock on the door, so he could jump out and say "Who's there?!" over and over and over again ... he was so cute x 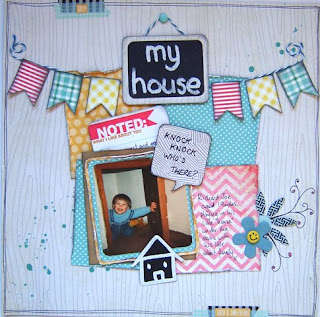 Richard lives in an apartment in Hackney now - as far as I know he doesn't have the rabbits any more, and he definitely doesn't jump out and shout "who's there?!" when someone knocks on the door ... :o)

The papers I've used are all from my last month's Quirky Kit - and as you can see, I'm still playing with the chalkboard idea ... this is definitely my "chalkboard period"!

I love this..you have found a house story to tell and scrapped the sketch in such a cute way. Thank you so much for linking us up at 365 so that I was able to come over and enjoy your take on the sketch.

Thanks Sian, it was such a fun sketch to work with! :o)

I love your take on the Sketchbook 365 challenge, great colour combo and he probably still has the rabbits but stashed somewhere 'safe'!

Found you via the Sketchbook link up page - cute layout :) Such a lovely picture. And the chalkboard is very interesting! I might have to give it a whirl :)