Here's a page a made a couple of years ago, probably before I was blogging - I came across it today and thought it seemed kind of topical, as there has been so much talk this week about bracing ourselves for the worst winter since 1947 and three solid months of snow ... which is pretty unusual around these parts! 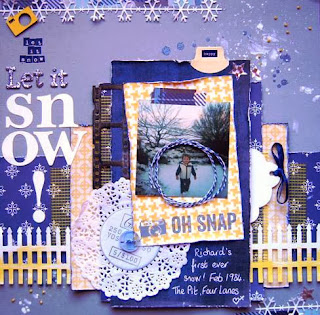 This picture of my eldest son, Richard, was taken about 30 years ago, during the winter of 1984. At the time, we lived in Cornwall, where snow was such a rare phenomenon that Richard wasn't to see snow like this again for years!

Now that I live in Norfolk, I'm used to much harder winters and snow is no big deal here. This is the scene from our front door one day last winter ... 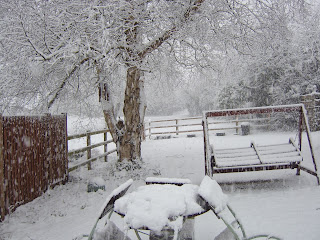 brrr! you are making me feel cold already! i love the look of snow though, its so pretty isnt it and peaceful. hopefully it wont be too bad this yr. love the layout too, great memories to look back on x

I will follow you anywhere my darling Annie xx

Goodness me that does look chilly!! And I like the cute comment from your DH- mine does that sometimes too LOL!! Beautiful snow page! Fancy making another one for the Inkido challenge ?

Thanks Helen - I hadn't yet seen the Inkido challenge but it looks like fun so watch this space! Don't think I have any Inkido products though - yet .... :o)