Case File #114 over at CSI this week is colourful and quirky and includes a fun sketch from Emma Stafrace at Page Drafts ... 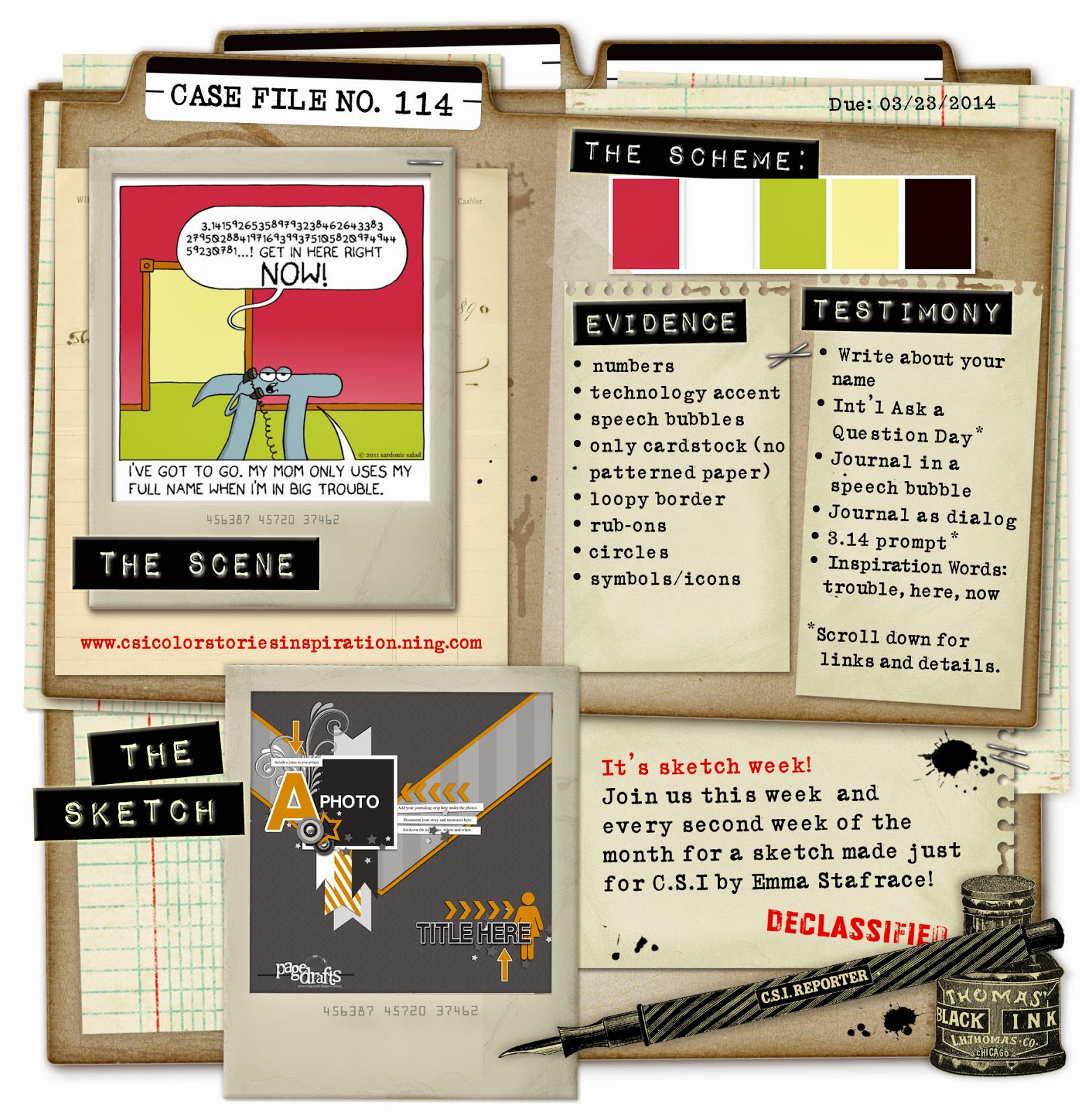 CSI mastermind Debbi Tehrani has found this intriguing Scene for us to explore - from this image, she takes five colours for the Scheme, as well as ideas for design elements, techniqes and journaling prompts. As it's the second week in the month, we also have one of Em's amazing sketches.

In order to solve the case, you need to follow all these clues to create a scrapbook page ...


I decided to scrap this photo of my younger son Tom taken around 25 years ago at a clown Festival ... 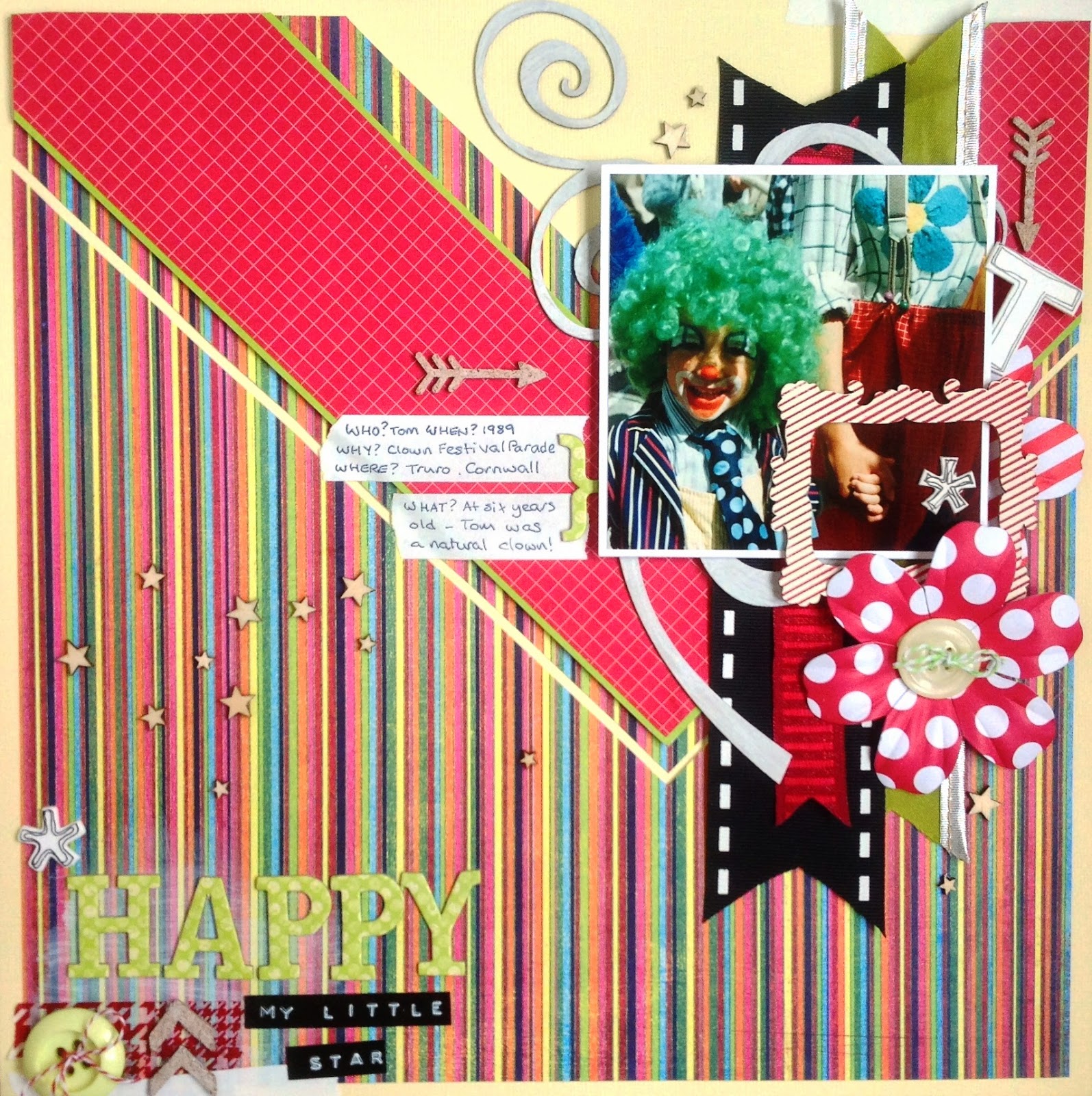 At the time, I was working as a children's entertainer, doing puppet shows and parties, and often had to collect him from school still in my "uniform", but Tom didn't mind at all. A couple of times he dressed up as my little sidekick and came along to the children's ward at the local hospital where he was a big hit with the kids AND the nurses - a natural clown!

Let's have a look under the magnifying glass to check for clues ... 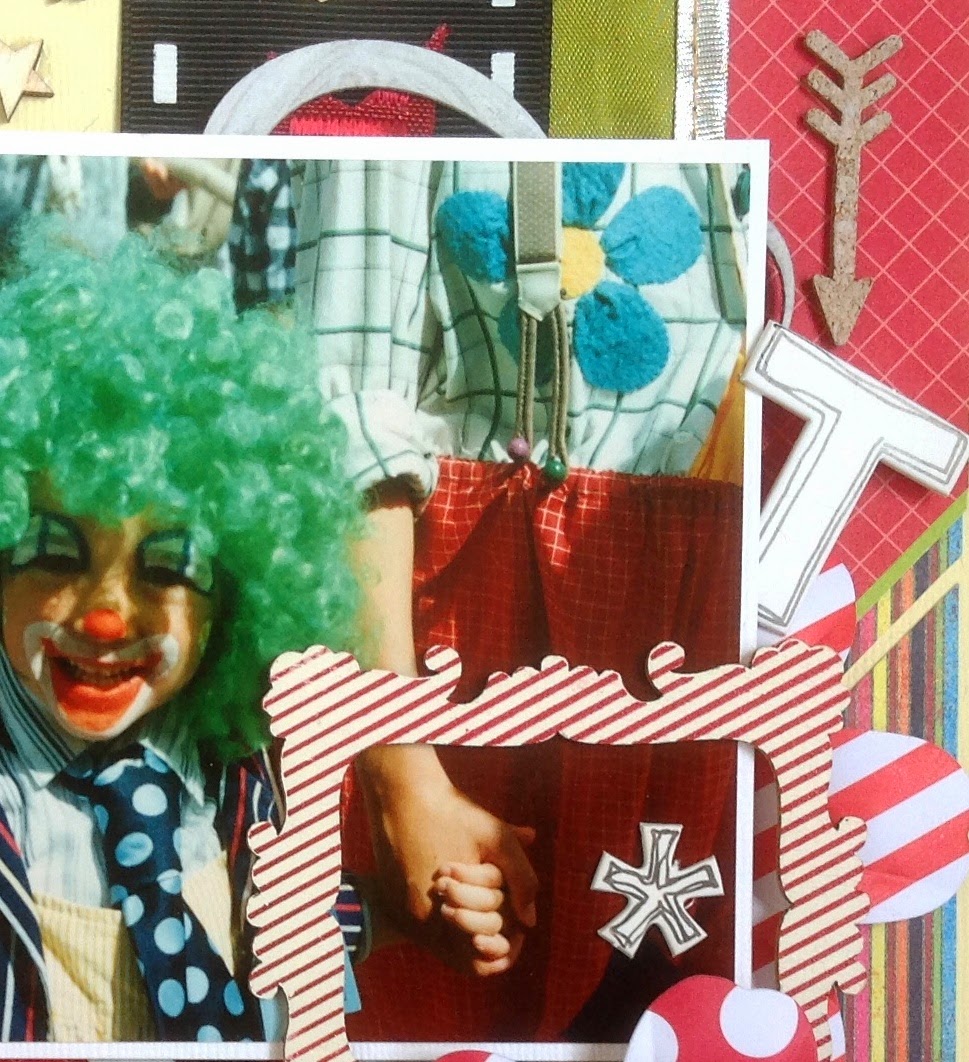 That red checked paper was so similar to the pattern of my clown trousers it was just perfect! The cork arrow is pointing to the T for Tom. The striped pp echoes Tom's blazer (which I used to wear myself when I was little) and the spots on the big clown-style flower pick up on his spotty tie.

I wanted to highlight Tom's little hand holding mine (isn't it funny how you can't remember the last time they held your hand to cross the road? You just realise one day that they don't any more) - so I put a frame around that part of the picture, added an asterisk ... 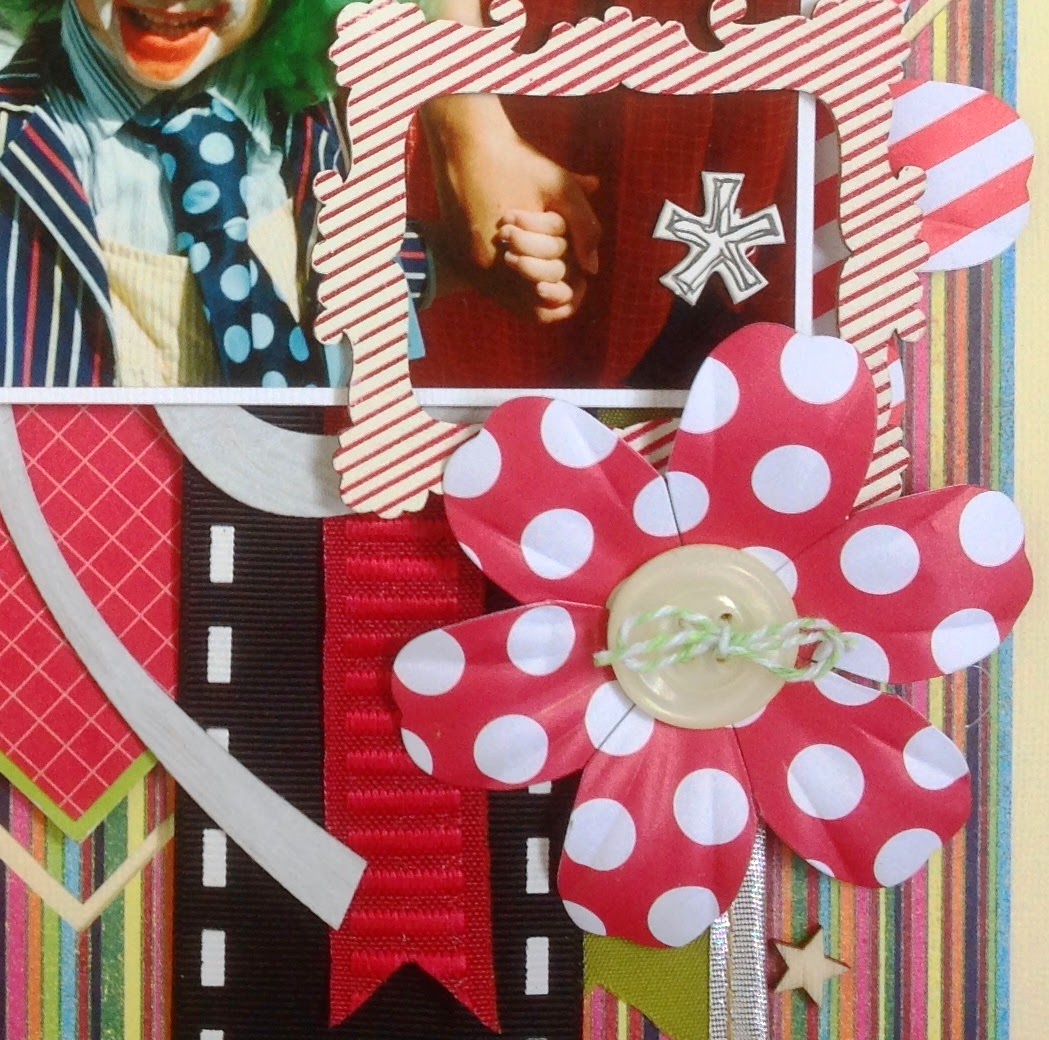 ... then linked it to the word "Happy" by adding another asterisk to my title ... 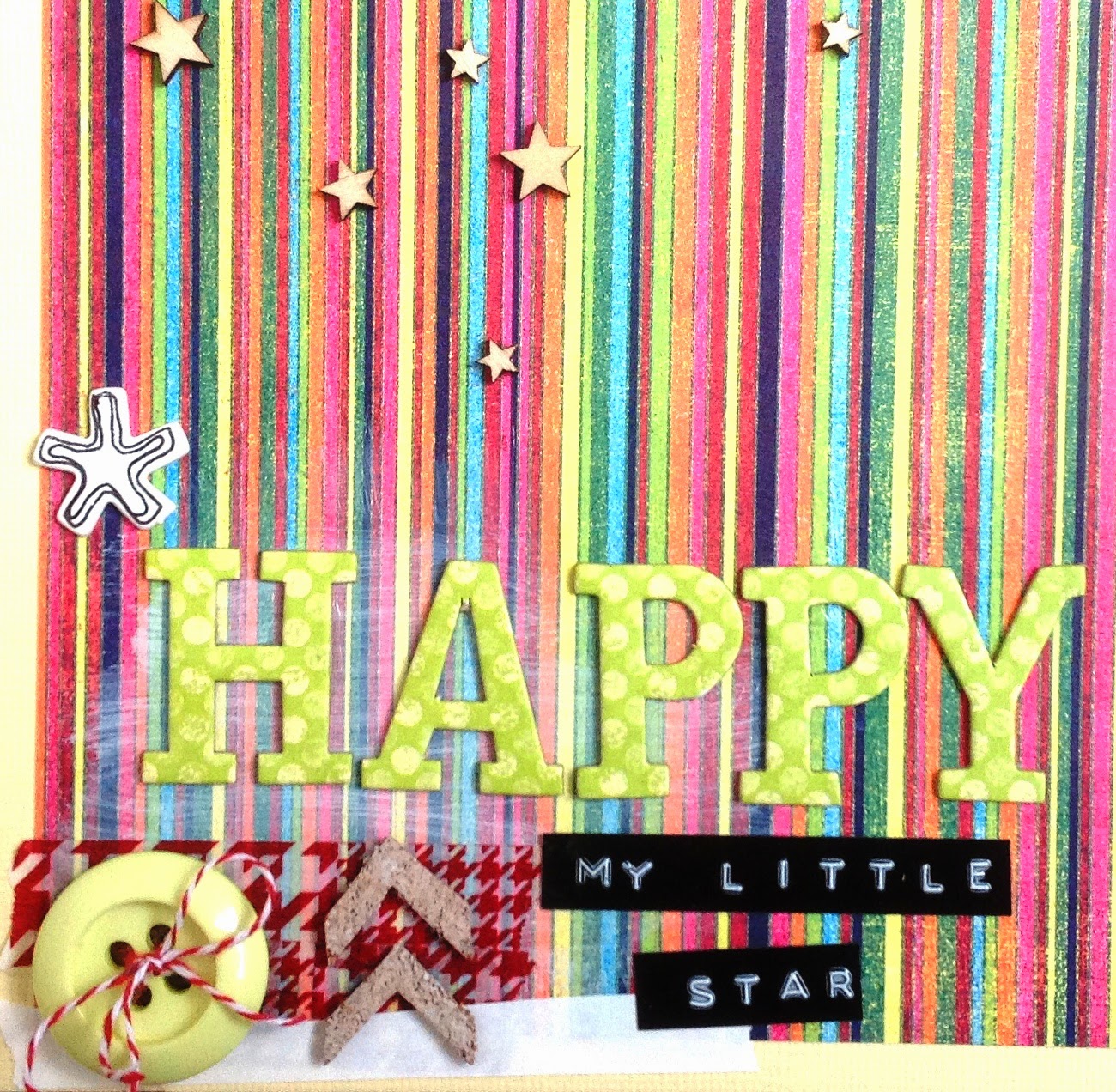 A button tied with twine adds a circular element, and the chevron symbols give more emphasis to the title. The wood veneer stars echo the subtitle and anyway I'm totally addicted to them - I just love how they add a bit of texture and fun to the page.

So, that's how I solved this case - why don't you have a go? Pop over to CSI for loads more inspiration and ideas.

Thanks for stopping by today, see you again soon.

its lovely Annie. What papers did you use? they are perfect! x

Love it - that stripey PP is so perfect & you did a great job with the V in the sketch...I've got this out waiting for me....I really looove your Vibrant take. And the hand thing? TOTALLY CUTE!!!

Oh wow…love the bold and vibrant take on the colours and the clown photo is perfect for this sketch :D

Thank you for your kind words ladies, I really appreciate it. Louise thanks for asking about the papers, I totally forgot to write down my ingredients and I've had both those papers so long I can't remember the details, but the stripes were an Abbey Road design and the checks were from Stampin' Up. The fab flowers are Papermania.

And Tom - I hope you never stop clowning around! :o)

I love everything about this layout and why am I not surprised to hear that you would dress as a clown. I love this fun layout that has Annie written all over it. I love that layouts make you think - like about the last time he held your hand... because one day you just realise that.... Stunning Annie layout.